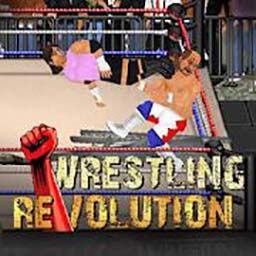 Android IOS
* For reference, Wrestling Revolution game websites are all approved, there are no viruses and malware.

1. The game is very simple and easy to play with a 3D image.

-Swipe the screen to make it run or start the action

-Touch anywhere on the field to bring them closer

-Release your finger to taunt, pin down or cancel an action

-Tap the opponent to attack the knocked part of their body

-Grab your opponent with a pinch