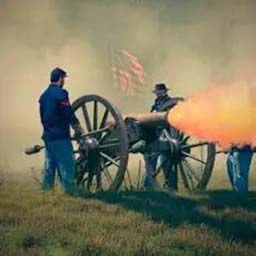 Android IOS
* For reference, War and Peace: Civil War Clash game websites are all approved, there are no viruses and malware.

Unleash the power of a unique faction of heroes, lead your army to victory in head-to-head and 2v2 battles found by the powers of magic and chaos, transform skilled warriors into immortal heroes, and bring great civilizations to the edge of war flooding the world. Choose your race and prepare to expand into disputed territories in a war where only one side can survive!

Construction of iconic cannons and rifles.

Choosing your side and fighting for national domination.

Using diplomacy to strengthen alliances with other commanders.

Explore the world map to collect resources and scout for enemies.

War and Peace: Civil War Clash is an American-style war management strategy game, players will personally experience the American Civil War era, feel the real background and new strategic gameplay, you will choose one of the camps to join, recruit soldiers to form an army to train your non-commissioned officers, train and strengthen combat power, upgrade military sites and weapons, rich strategic military gameplay! The game is an exciting and gorgeous adventure!