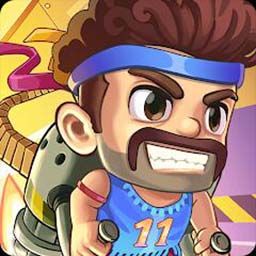 Android IOS
* For reference, Jetpack Joyride game websites are all approved, there are no viruses and malware.

Dazzling graphics, the game's soundtrack style is somewhat alternative and very powerful. The moment to witness your strength has come!

Players in this game control the game protagonist and use its backpack to avoid various obstacles and destroy enemies on the way to escape.

However, this flying backpack power is not the traditional fuel power, but the use of continuous firing bullets as a rising flight power.

Set off in the legendary machine gun jet flyer to destroy the evil scientists, but in each game you'll have to collect coins and complete missions to earn cash to buy new equipment in the "warehouse"! Pick your favorite jet flyers and cool costumes, stock up on items, and then return to the game to continue the fight!

Jetpack Joyride is an adventure action game with jet as an element, in which players need to control your character to destroy the abominable enemies, but pay attention to avoid all obstacles, to protect their own safety, ah, the game fluency is good, come and try it!