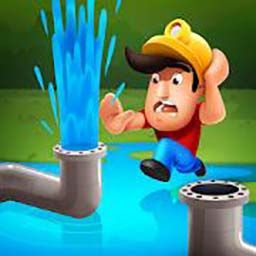 Android
* For reference, Diggy's Adventure: Maze Games game websites are all approved, there are no viruses and malware.

1000+ brain teasers and puzzles to solve

100+ fun characters to interact with

However, before facing the many relics, let's warm up and dig out the important maps and diaries from the ship swallowed by the sand! Here players will learn the basics of digging - basically the purpose of the game is to dig out obstacles and move forward to the goal, each digging requires the consumption of energy (Energy), with different materials of obstacles, the required consumption of energy also varies, so in the premise of limited energy, think about how to reach the destination with the least amount of energy is also the fun of the game. Even if the stamina is exhausted, do not worry, as long as you let Diji rest for a while, stamina will naturally recover slowly with time, or look carefully at the map there is no cute "little Anubis", he will also help players to restore stamina Oh!

Diggys Adventure is a cartoon casual style maze adventure game, in which players play a young archaeologist, in an archaeological journey suddenly windy let their team to the unknown island, and discovered the mysterious Egyptian tomb unknown to the world.