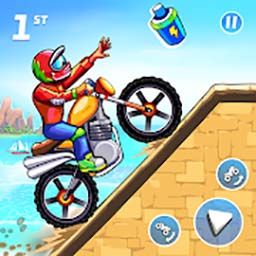 Android IOS
* For reference, Bike Racing Multiplayer Games: New Dirt Bike Games game websites are all approved, there are no viruses and malware.

2, control their motorcycles on a track full of challenging obstacles.

3, by performing stunts to cross the obstacles and reach the end.

1,Full 3D perspective design, in line with the reality of the physics engine collision.

2,A variety of cool motorcycles for you to drive.

Bike Racing Multiplayer Games: New Dirt Bike Games is a motorcycle theme for the off-road game, the game driving your motorcycle to complete the off-road challenge again and again, in the face of the difficulties that constantly appear ahead, you can overcome one by one?